Professor Sarit Kraus is the Coordinator and Technical Director of LAW-TRAIN. In a recent interview with one of Israel’s leading newspapers the professor from the Bar-Ilan University explains the importance, benefits and objectives of running a project like LAW-TRAIN. We summarized the most important points and key messages from the interview. 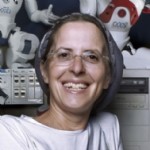 The Virtual Suspect is on its way to the investigation room

Police tend to describe the meeting in front of the suspect in the investigation room as a “battle of brains”. It is one of the places where human qualities are reflected in the extreme. Accordingly, the investigator-suspect relationships represent for computer professionals engaged in artificial intelligence a very high summit to conquer.

Prof. Sarit Kraus, Department of Computer Science at Bar-Ilan University, a renowned expert in the field of artificial intelligence, has developed an artificial intelligence system for training investigators that has extended the ability of computers to reconstruct the investigation processes. This resulted in a prototype of a Virtual Suspect, which impressed the EU that provided a research grant to expand the Virtual Suspect. It is intended that in the future it will become a training tool for investigations of complex international crimes that combine several investigative bodies from different countries. The partners of the expanded project include police officers, scientists and high-tech professionals from Israel, Portugal, Spain, Belgium and Austria.

The training of police in investigations, include, inter alia, an element of role-playing games. Experienced investigators are often used as suspects that are questioned for training and present figures, lines of thought and different reactions and a false story. But the range of functions of a policeman actor is limited, as is the time veteran cops can devote to training their colleagues comes in account of the ongoing work. This is where the Virtual Suspect enters the picture, with its display of facial and verbal responses that reflect the ongoing development of the investigation.

At present, the project aims to humanize the virtual character as much as possible by adjusting its body language and psychological state. In order to make the system dynamic and effective, it is required to take into account the degree of cognitive load, emotional stress and hostility of the suspect towards the investigator and each question affects one or all of these parameters. The personality set for the Virtual Suspect is reflected on how he or she responds to questions.

The benefit of the proposed simulation tool is not limited in place and time. At the end of the practice the system performs an analysis and gives the researcher feedback, from which it can be learned what still needs improvement.

Israel Police cannot say when and how they will use the Virtual Suspects, but notes that it will be added to the existing training methods, rather than replace them. Asked if one day it will be possible to replace the human investigators with virtual ones, they claim that “there is no substitute for human investigators, as he or she is the one that conducts the entire orchestra.”